As you already know that Apple has released its new iOS 12 Beta version and it is for both users and Developers. This is the most waiting version for iPhone/iPad users and wishing to experience a new iOS feature on their devices.

But the problem is that with the release of new iOS 12, many old phones can become obselete and there is nothing to surprise at all.

This new iOS version will support 64 bit apps so there is a chance that iPhone 5 and iPhone 5C might don’t have the chance to upgrade themselves.


But the good news is that if your device is new, means the iPhone or iPad you are using is new then obviously it will support iOS 12 on your device.

According to Apple, those devices, which support iOS 11 will easily support iOS 12. All in whole, it means that if your iPhone/iPad is running in iOS 11 version then move ahead to upgrade your device to iOS 12. Its obvious that users will get some better improvements in this new version and some new features too.

In fact, I have gathered the supported devices of iPhone and iPad here to know actually, which devices will be compatible with iOS 12 update.

So read below to know the list of iOS 12 supported devices and the things you have to do before installing iOS 12.

The very first thing you should know that yet the date is not final about the full release of iOS 12 and it is already in Beta version.

If you find your device in the list below then Congratulations, your device will upgrade to iOS 12 and you can experience better improvements with some new features on your iPhone/iPad.

Furthermore, the image shown below is directly from Apple official that has the complete list of supported hardware of iPhone/iPad/iPod Touch models, which will be compatible with iOS 12. 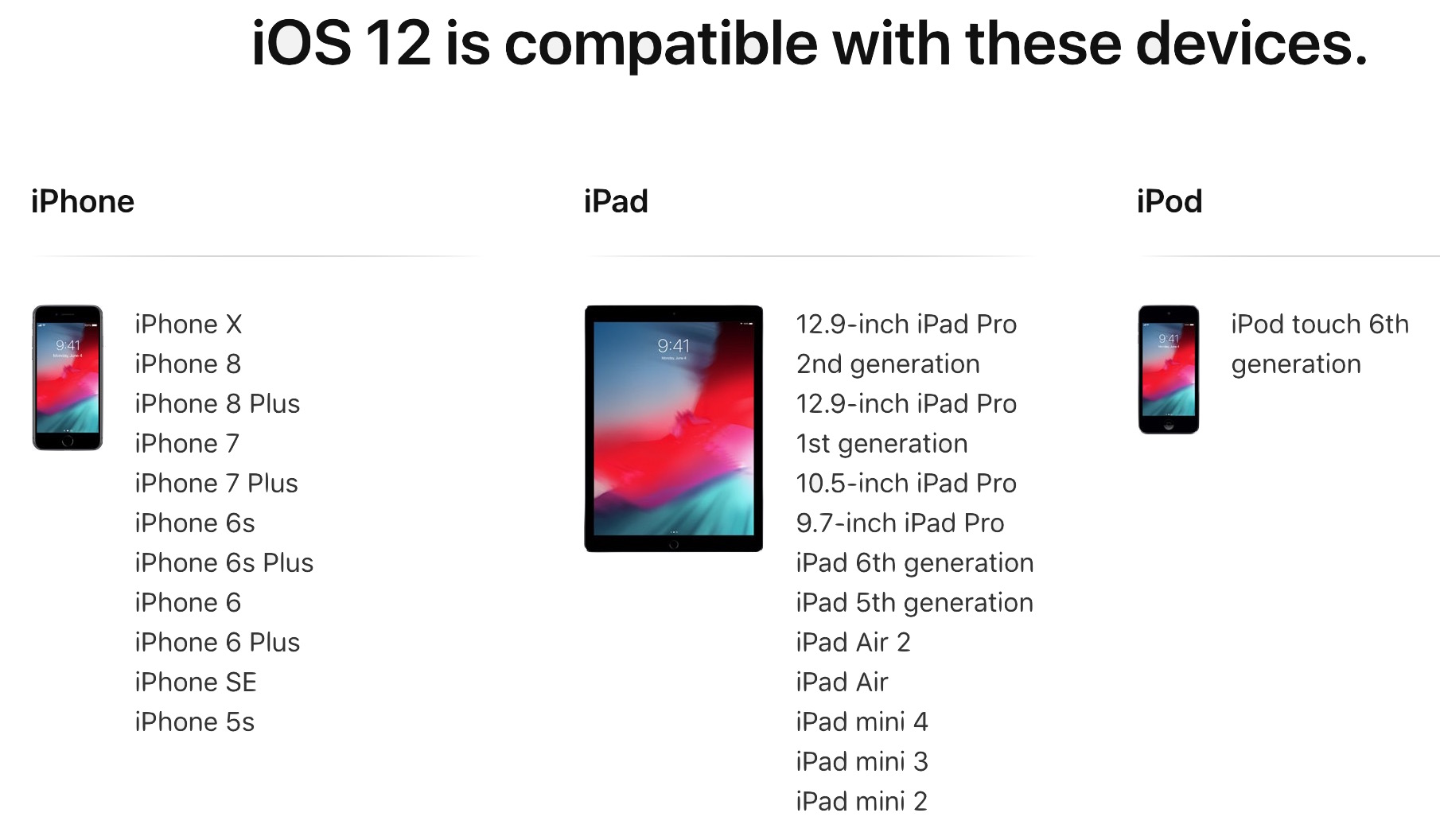 Things to do before installing iOS 12

Well Apple is all set to release iOS 12 version worldwide, so it seems that the entire world is eagerly waiting for it. Its true that after the release of iOS 12, its not about simple download and install the version but you have to prepare your device for the new update.

Some of the things are mentioned below that will completely help you to do the things that are required before installing iOS 12 on your iPhone/iPad/iPod Touch devices.

This is the first step that you need to follow before you move ahead to install the new version. As I have mentioned the full list of iDevices that will support iOS 12 version, so once have to look on those.

If you don’t find your device listed above then its sad that your present device will be not suitable or compatible with iOS 12.

It is advised to every iOS user that before you go to install the version, ensure you are familiar with its changes that you will see afterwards. 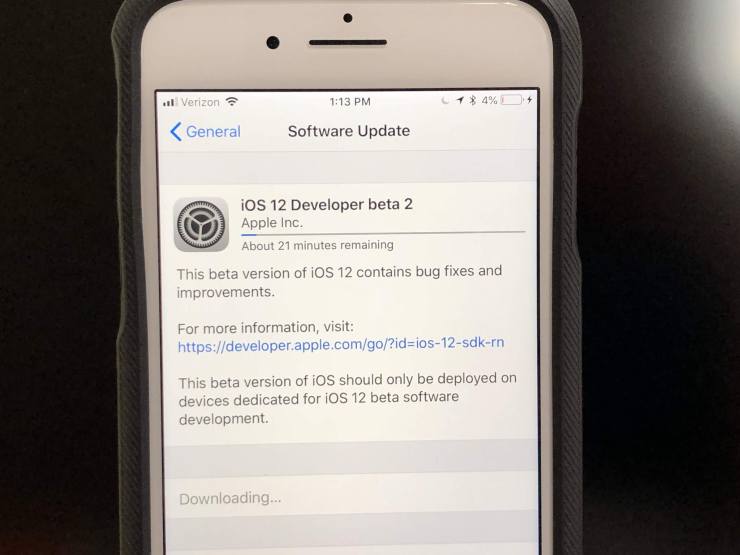 Having knowledge about it will help you to know about the changes if seen any.

Obviously, the iOS 12 version will be large compared to older versions with lots of changes.

Though its not yet known about the complete list of changes of iOS 12 and its assumed that Apple can add or subtract some features after the release of iOS 12 worldwide.

So after going deep research on iOS 12 beta’s changes, you can now decide whether your device is compatible to it or the download will be suitable for your device or not.

Now it’s always a big challenge for your device when you wish to upgrade it with some new version. Its very important to have enough storage space to download and install iOS 12 on your phone.

Without space, you cannot enjoy the features of iOS 12, so make sure you have at least 4GB space on your phone to comfortably install iOS 12.

This is yet another important factor that you should keep in mind. Before you install any update on your device, make a backup of all your data in safe place. Several options especillay with iTunes and iCloud really helps to backup all your important data safely.

Even you can go for third party tool like iOS Backup & Restore Tool that completely backups all your data and files without any issue. This is an easy way to backup every files and also easy to access.

Generally, you might have noticed before that whenever you try to upgrade your device then it can show you several issues or bugs that popups anytime. 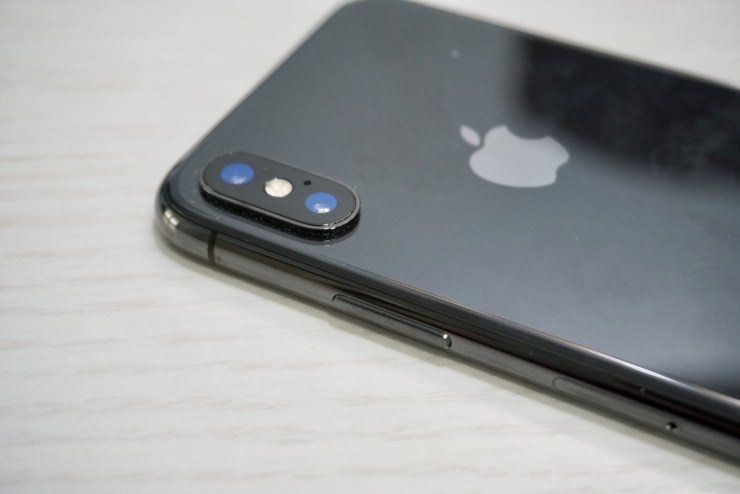 So you should be aware of the situation and it is recommended to know about the fixes that you can get while installing iOS 12.

Even you can lose your data while upgrading your device so its better to create a backup of your data. And if not then you can try iOS Data Recovery software to recover all lost data from iPhone/iPad devices.

You should also aware about the problems and their solutions that can occur while updating iOS 12. Some common problems can be Wi-Fi connectivity, installation problems, cellular data issues, Bluetooth connectivity issues and several others.

Well, everyone is just waiting to enjoy the amazing feature of iOS 12 but also important to know whether the device you are using will be supported to iOS 12 or not. Also know what are the things should be done before you begin to download and install this new version on your iPhone/iPad.